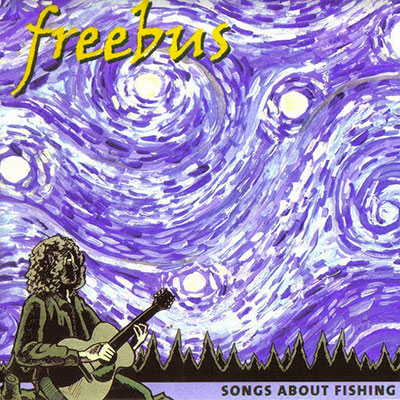 Songs About Fishing is the second release by Freebus on Have A Sandwich Records. It features lush recording techniques and a big drum sound on many of the tracks. Tim Rutkowski's superb drumming is a big feature of the album, along with Freebus' expert guitar techniques.

The album starts with a beautiful articulated acoustic guitar that is then challenged by a distorted heavy vocal line, portending the dichotomy of the entire album, which is a blend of heavy sound, light and lyrical melody and all things in between. Freebus deftly moves from the heavy sonic slab of music "Ridin' Low", featuring a gigantic guitar sound, to the light and lyrical sounds of "Where Are Them Shootin' Stars." The true center-piece of the album is "So Many Stars," which transports you to the magical place where the music was written.

A 2 disc set, the second CD features many of the original "field recordings" that are the basis for the album. The album concludes with a tribute to the late Jeff Szeremet, a friend and confidant of Freebus who passed away at too young an age. Featuring a great repeating descending guitar motif, it is a fitting close for an album that balances heavy rock and pastoral images of nature.